January 2021 |
Did the Spanish Inquisition have a Bad Press? The art of half-truths in Renaissance Europe

Did the Spanish Inquisition have a Bad Press?  The art of half-truths in Renaissance Europe 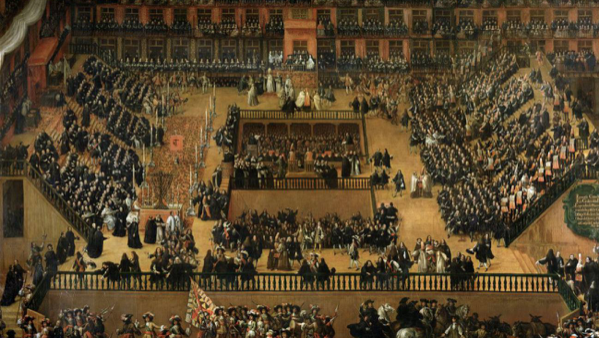 This lecture explores through the art and literature of the period the work of Spain’s most controversial institution, the Spanish Inquisition.  In 16th century Europe, art and literature became powerful tools for political and religious propaganda.  This propaganda was often biased and manipulated not unlike the “alternative facts”, “fake news” or post truth” rhetoric we hear about today

Daniel Muñoz Triviño is a history lecturer at the Faculty of Theology of Madrid (Fliedner Foundation).  Since 2011 he has been lecturing professionally on a number of subjects with particular focus on history, art, poetry and religion.  He has lectured in the UK, Spain, Sweden, Italy, US and New Zealand, as well as around the Mediterranean Sea on the Aegean Odyssey, a cultural cruise ship.

He is originally from Southern Spain but studied in the UK (Durham and Oxford Universities), Germany (Tubingen University) and Spain (Madrid Complutense University).  He was ordained an Anglican Episcopal priest and served in the Oxford Diocese between 2001/2010.  In 2010 he returned to Spain and established a creative retreat centre in Andalusia offering unique educational programmes exploring the link between the arts and spirituality