Before her untimely death in 2016, Dame Zaha Hadid was one of the most distinguished architects in the world. She was also a talented designer. As well as receiving numerous awards and honours, she received the Pritzker Prize for Architecture in 2004; the UK’s most prestigious architectural award, the RIBA Stirling Prize, in 2010 and 2011; and the Royal Gold Medal in 2015. In 2012 she was made a Dame for services to architecture.

Zaha Hadid’s work is exciting because she developed a new form of architecture: she set architecture free by rejecting 90 degree angles. Her early abstract paintings are of particular interest because in them she began to create her visionary world where there is no definition, lines converge, and gravity disappears – all conceived before the advent of advanced computer software.  From her early sharp-angled buildings she developed a fluid architecture, where floors, ceilings, walls – and even furniture – all form part of the overall design. Thus many of her later structures are extruded to the most extreme organic shapes in what she called a “seemless fluidity”.

The lecture tells the story of this pre-eminent architect. We move around the world to look at some of her completed works, including her most famous building in the UK, the Aquatics Centre for the London Olympics in 2012, as well as unexecuted designs.  Members who have a keen interest in cutting-edge design will be mesmerised by the daring yet brilliant structures of Dame Zaha Hadid. 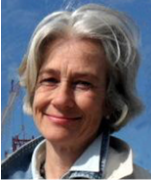 Anthea Streeter studied the Fine and Decorative Arts in London and continued her studies at Harvard University. It was while at Harvard, where there was great enthusiasm for American design, that she became interested herself in 20th century architecture. Since returning from America she has taught on courses in Oxford and London, lectured on the Country House course in Sussex, and for several private groups around the country. Special interest in the architecture and design of 20th century.